Back in May, I attended A Dark Night of Canadian Fantasy, a reading put on by five talented local authors, where I met Nicole Chardenet. Nicole is a transplant from the United States, but I’d say she fits in pretty well with her colleagues up here — she’s intelligent, irreverent, and utterly hilarious. Her book Sumer Lovin’ is much the same. 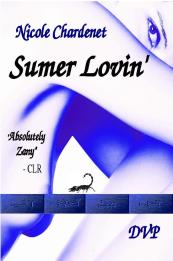 The story gets rolling when an earthquake in modern-day Toronto opens up a door to another world and unleashes an ancient femme fatale with a thirst for virgins, a small host of warriors who got lost on the way to Canaan, and a whole lot of sexual shenanigans. Rachel, a Jewish matchmaker from New York, gets caught up in the mayhem when Dave, the ultimate virgin, comes to her for help getting married. His quest for a mate (or to at least find a woman who will help him clear up that new-guy smell) becomes rather urgent when our vicious villainess catches his scent.

Chardenet uses stereotypes — social, political, ethnic, religious, or otherwise — to great effect here, highlighting some of the oddities of life in Canada’s largest and most diverse if somewhat romance-averse city. She <ahem> makes no bones about playing up the extreme Jewishness of Rachel’s overbearing mother (much like Howard’s mom from The Big Bang Theory), lays it on thick when the Canaanites’ land claims resound with the unresolved political conflicts in Canada and around the world, and pokes fun (and everything else) at the innumerable freaks, geeks, and lost souls who couldn’t pick up a hot date with an asbestos mitt.

However, Chardenet isn’t being cruel here; instead, she uses these stereotypes and their interactions as a humorous way to present a multifaceted and complex view of some, er, touchy subjects. Additionally, the same quirks that make her characters such oddballs are the very same features that make them endearing and help them win back the city from some seriously wacked-out gods.

The characters in this book are all delightfully zany, but the major players are not always clearly distinguished through their dialogue.  Many of them, even the deities, speak like slang-slinging teenagers to provide a Three Stooges–style verbal slapstick effect just a little too often. I believe the purpose here was to create humour by juxtaposing ancient gods and modern vernacular, thereby rubbing the divine up against the profane, and it usually works. However, it starts to lose its punch. Additionally, this is a missed opportunity to distinguish and enrich the characters through unique speech and thought patterns and to use these differences to heighten the comedic tension.

Overall, this was a solid read that had me cackling enough to unnerve whatever poor soul was sitting next to me on the subway that day. If you have a warped sense of humour and can handle copious amounts of profanity, vulgarity, and Yiddish, Sumer Lovin’ will definitely get your juices flowing. However, if sexual innuendo makes you squirm uncomfortably or if you’re a strident defender of rigid political correctness, then I suggest you move along because this book may actually cause you to experience seizures.

My editing experience includes a wide variety of books, articles, and commentary in both fiction and non-fiction. I work with authors of novels and short stories, students preparing for their dissertations, and corporate clients who publish in the financial and education sectors.
View all posts by quillsandqueries →
This entry was posted in Reviews and tagged book review, Canadian authors, fantasy, Nicole Chardenet. Bookmark the permalink.