Posted on April 8, 2014 by quillsandqueries

Normally, I’m not one to hang out at conventions because, well, I expect them to be noisy, crowded places and I don’t generally like noisy, crowded places. But after hearing a great deal about Ad Astra from writers, editors, and SF fans, I decided to dive in and spend some time checking out the goods.

I arrived at the Sheraton Parkway North Hotel around 1:30 PM on Saturday, just in time to

check out an interesting discussion on aesthetics in science fiction. One of the panellists was award-winning artist Donato Giancola, who discussed the current trend of having desaturated or black and white cover art, whereas a few years ago, rich, colourful images were desirable. I hadn’t really paid attention to this trend before, but later that night while I was chatting with author Michael J. Martineck, I noticed that his latest book, The Milkman, had a stark, colourless cartoon of a rather malevolent-looking man with a long, sleek moustache carting around milk bottles while giving the reader the side-eye. Now, more and more, I’m noticing cover art that is monochrome, black-and-white, or otherwise pale and bleak.

Another great panel debate was devoted to figuring out what makes a great villain, a rather rousing topic. Unfortunately, the group had a great deal of trouble coming up with many female villains, especially those who do not use their sexuality as a weapon, although we know they’re out there. Mystique, the clever, blue-skinned shape-shifter of X-Men fame, came to mind quickly, as did Poison Ivy and Cat Woman, but beyond that, it was a struggle. I nearly facepalmed myself this morning when I thought of Wencisia from Children of Dune. I can’t believe I missed that one.

Authors, of course, were in abundance and several books were launched over the weekend, including Alison Sinclair‘s Breakpoint: Nereis and Suzanne Church‘s Elements. I had the pleasure of meeting the hilarious Ira Nayman, who could hardly be mistaken for the introvert he claims to be, and the lively Sarah WaterRaven, who created the cover art for her second edition of Detective Docherty and the Demon’s Tears, which just so happens to be black and white with a splash of red. I also managed to bump into author and writing coach Nina Munteanu, whom I met earlier this year when she gave an enlightening talk about the self-publishing industry for the Editors’ Association of Canada, Toronto branch. And, as an added surprise, author and fellow editor Vanessa Ricci-Thode was there to promote her first book, Dragon Whisperer.

Oh, and did I mention the many strange and fascinating oddments for sale in the dealer’s room? In addition to the publishing houses and booksellers, various vendors displayed their wares, including steampunk leatherwork and antique telescopes, unique jewellery, shirts displaying the molecular structures of life-preserving molecules such as caffeine and chocolate, and various types of artwork.

Admittedly, I gravitated towards the Green Cottage Gallery‘s adorably macabre plushy monstrosities, such as the conjoined lobster and dragon-with-Anne-Geddes-babydoll-head. (The vendor claimed that last one made grown men recoil in horror, so I tested it out on my boyfriend. Confirming evidence was immediately obtained.) However, it was the pink spider bear that I truly fell in love with. It had eight sweet, soft, beary feet and a multitude of fuchsia eyes. Had I not already spent most of my budget on books, I’m quite certain that little guy would have found his forever home with me.

And what SF convention would be complete without costumes and corsets? After passing by Absynthetika a few times (it was next to the Green Cottage Gallery’s table and close to one of the entrances), I just had to try out their wares. I chose a white gold brocade, and while it wasn’t quite as comfy as my favourite pyjamas, it was far easier to wear than I expected, even when laced up tightly. I did not come home with one (that budget thing again), but I was very inspired to ham it up for the camera while bemoaning my distinct lack of a horned hat and spear. I hope to have that remedied in time for next year’s convention. 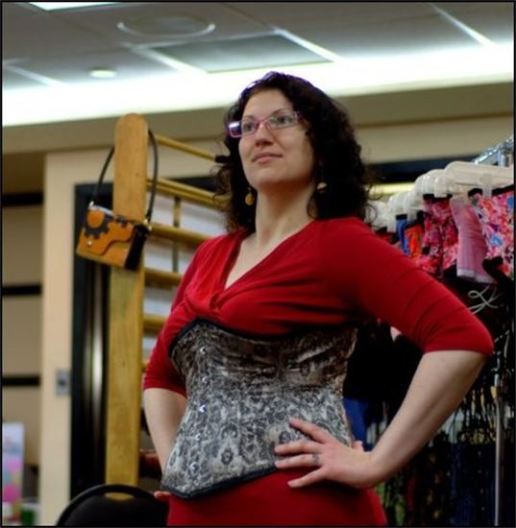 Are you singing “Flight of the Valkyries” yet?

My editing experience includes a wide variety of books, articles, and commentary in both fiction and non-fiction. I work with authors of novels and short stories, students preparing for their dissertations, and corporate clients who publish in the financial and education sectors.
View all posts by quillsandqueries →
This entry was posted in Events and tagged Ad Astra, Canadian authors, Canadian publishing, conventions, fantasy, science fiction, Toronto. Bookmark the permalink.